Canola Council of Canada sponsored a Canola Cook-off event at JW Marriott, Bangalore to spread awareness about Canola oil. I am so glad I attended the event. I learned some interesting cooking and nutrition facts related to Canola oil which I am sharing in this post... 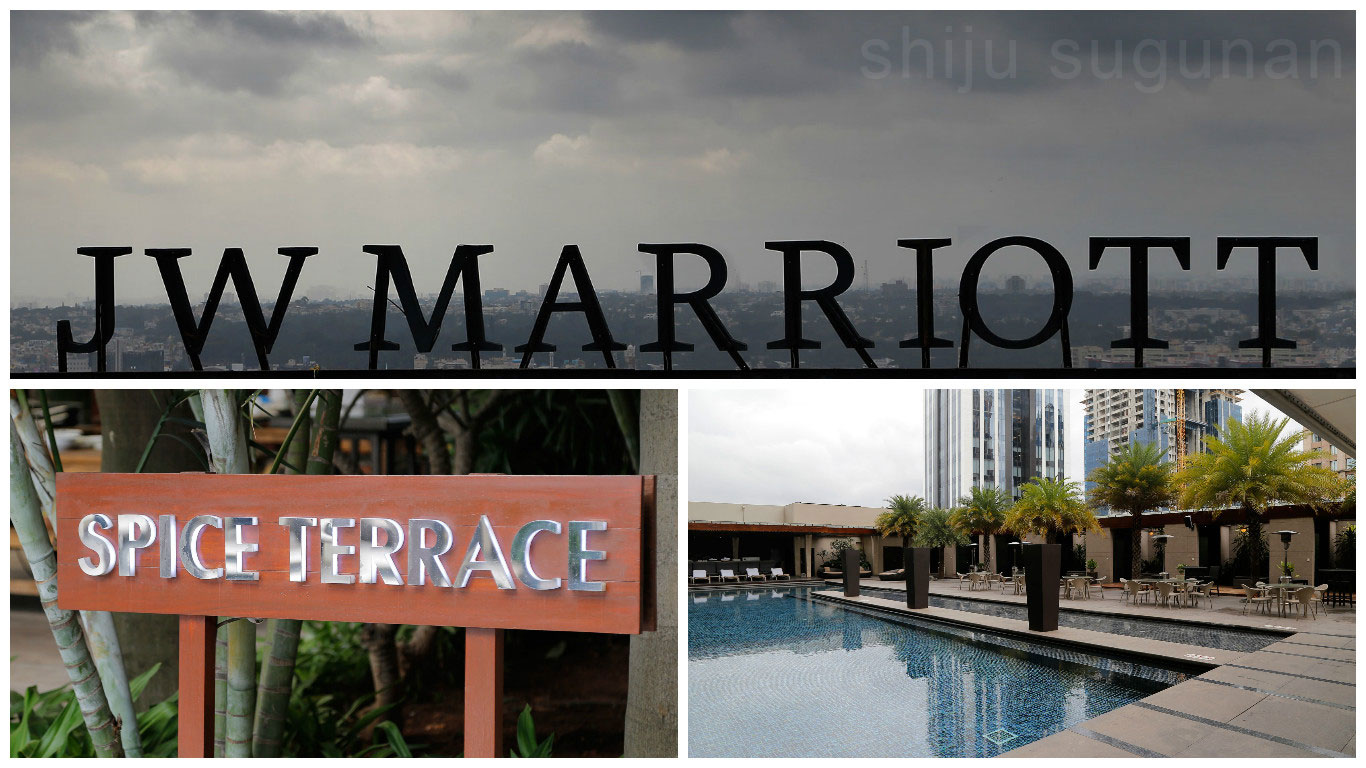 The event was held at the beautiful Spice Terrace restaurant at JW Marriott... 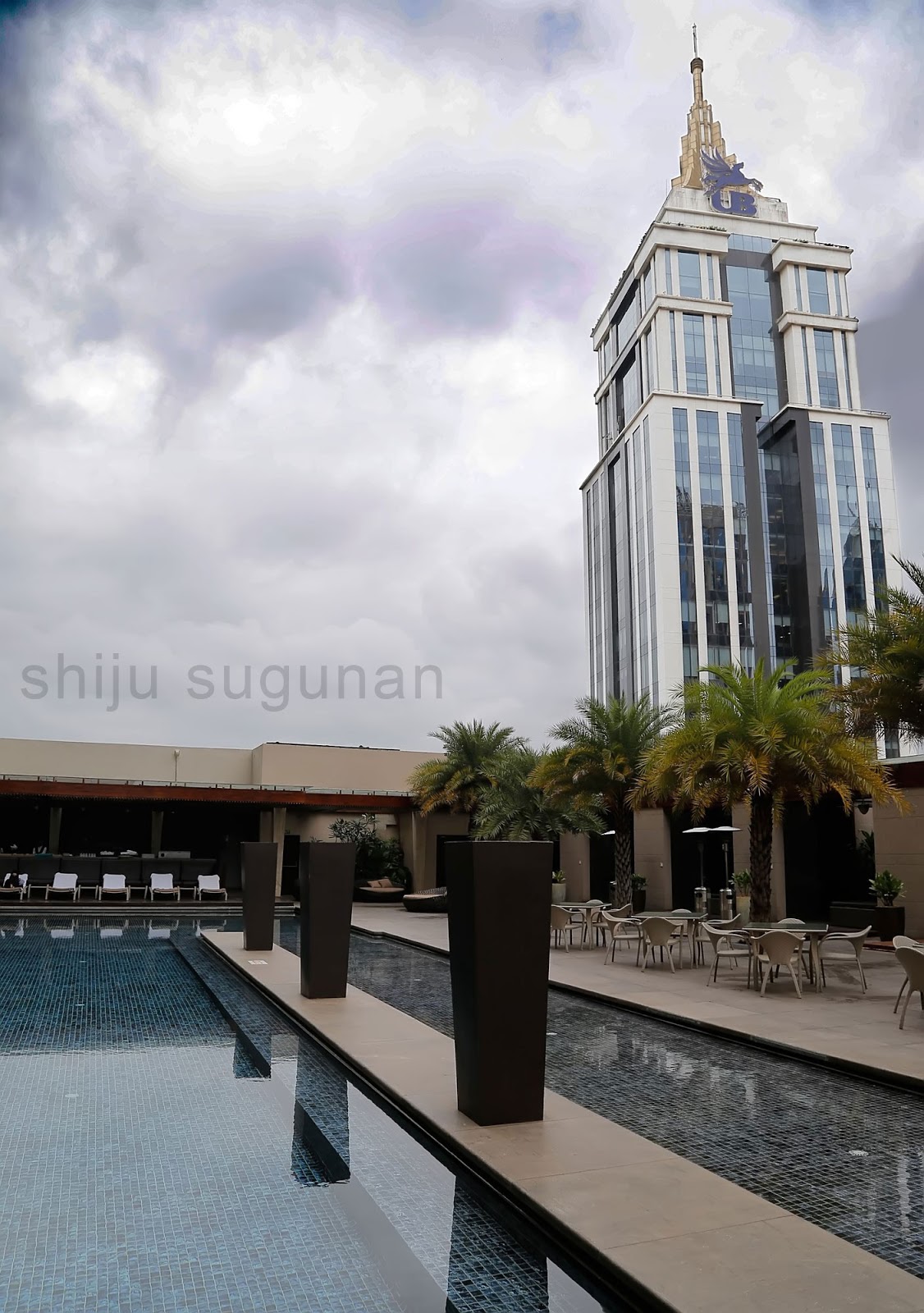 Bruce Jowett, vice president of market development at the Canola Council of Canada spoke about the health benefits of Canola oil and the reasons why it is considered as one of the best oils for heart health... 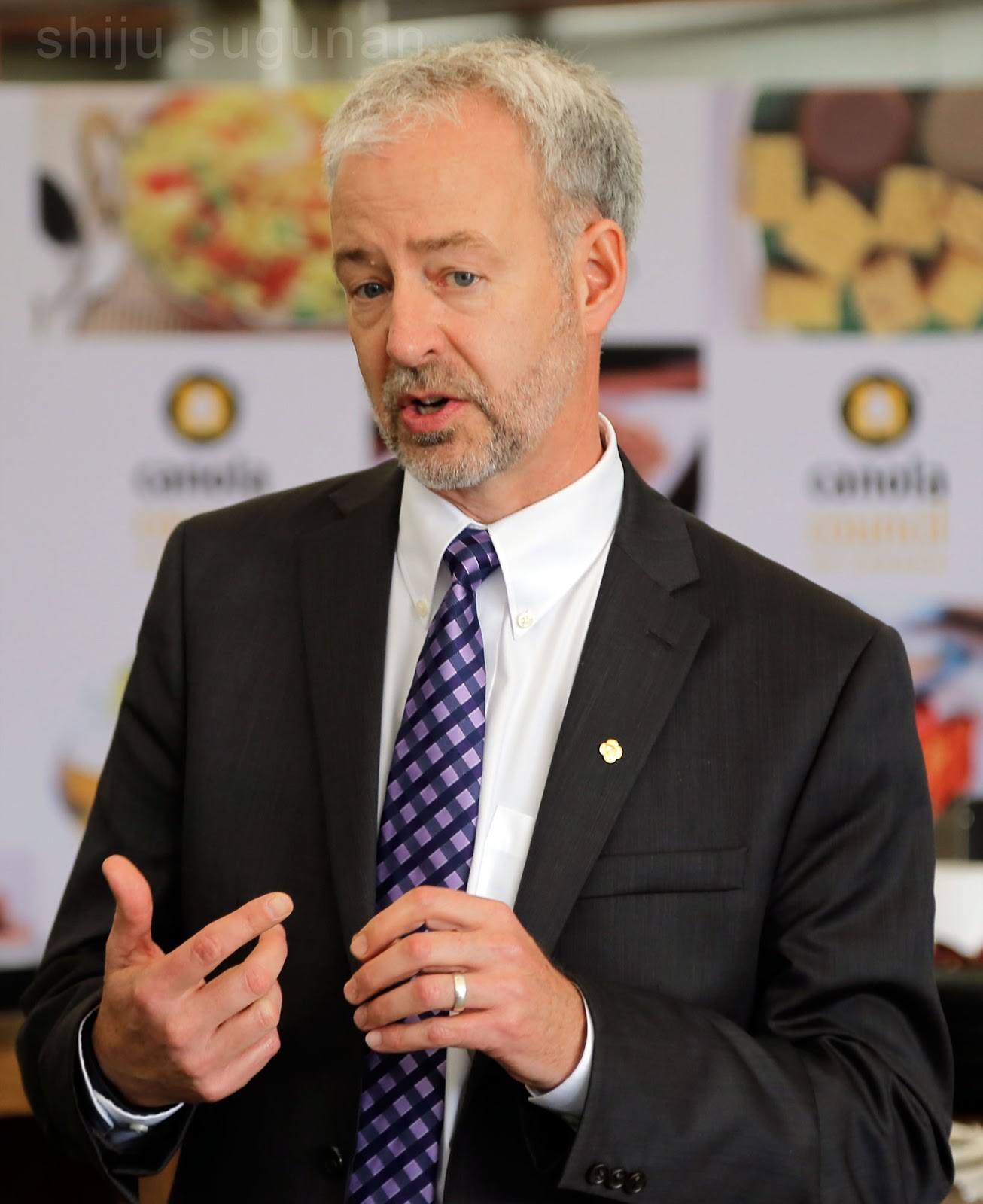 Canola oil comes from the seeds of the canola plant. Once harvested, canola seeds are crushed and the oil contained within the seed is extracted. The average canola seed is 45% oil. 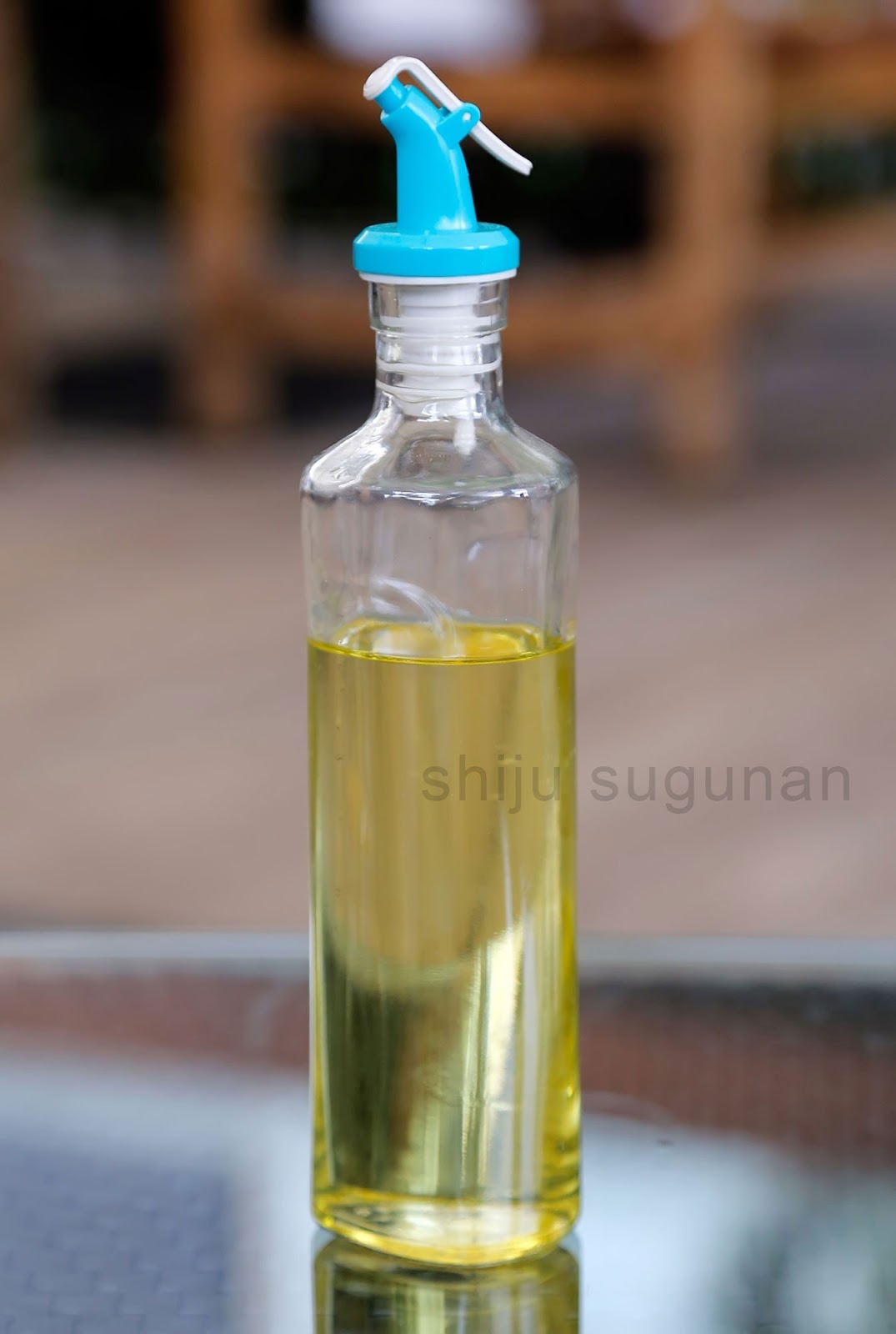 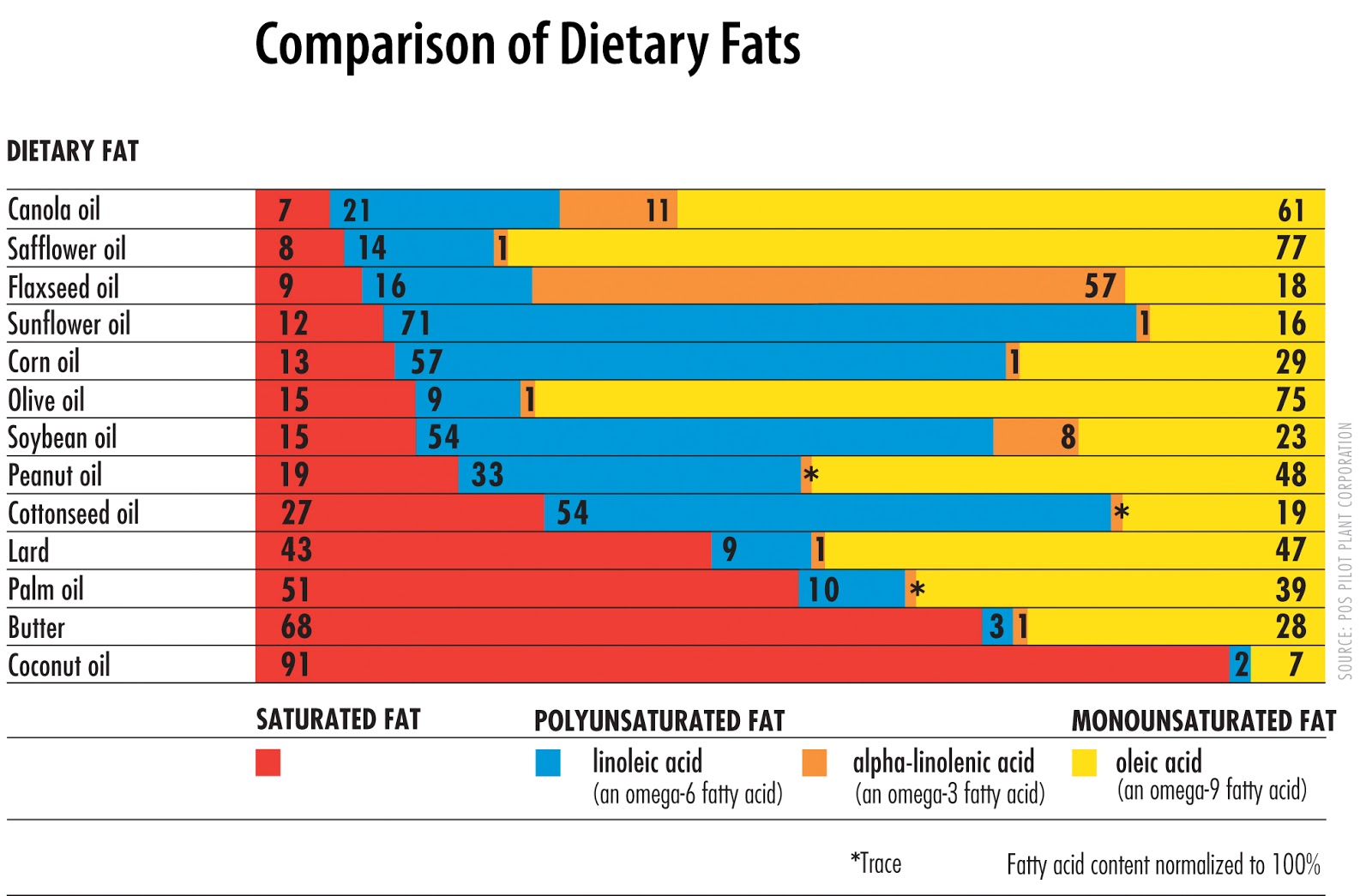 Canola oil is one of the healthiest cooking oils because it is:

Canola is a very stable oil that doesn’t break down at high temperatures, so it’s ideal for sautéing, stir-frying, deepfrying and other high-heat applications. Its smoke point — the temperature at which it begins to smoke and degrade — is one of the highest of all cooking oils at 468 °F (242 °C). That’s well above ideal deep-frying temperatures (365-375 °F or 185-190 °C). 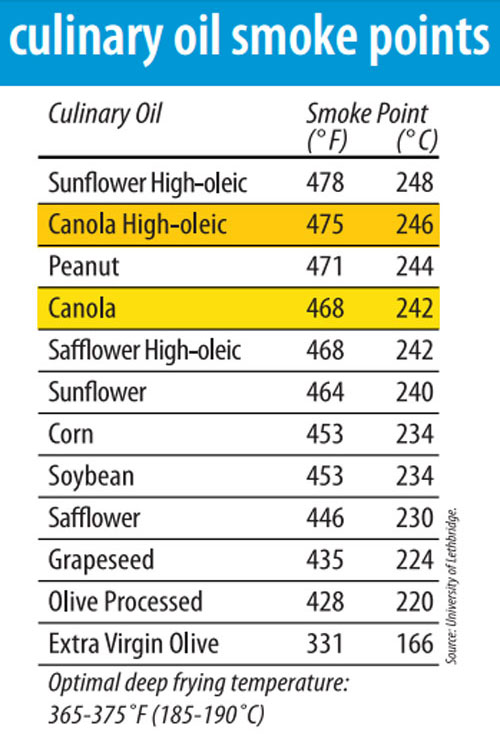 “Canola oil is one of the friendliest and versatile cooking oil which you can use for all types of food.” says Chef Jolly, director of food and beverage, at the JW Marriott Bangalore. 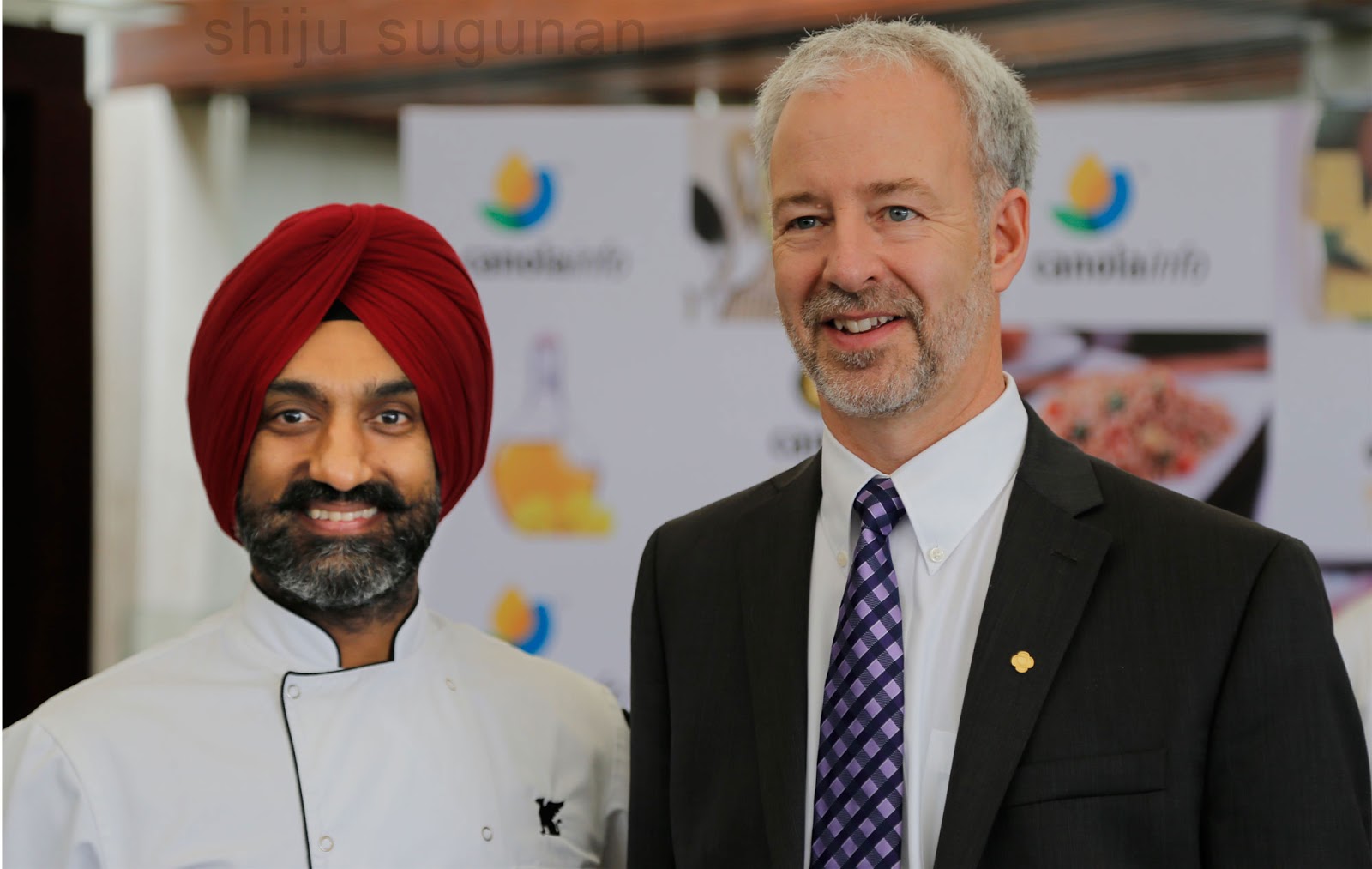 With a bottle of Canola oil in hand, chef Jolly started demonstrating how well Canola oil works with Indian cuisine... 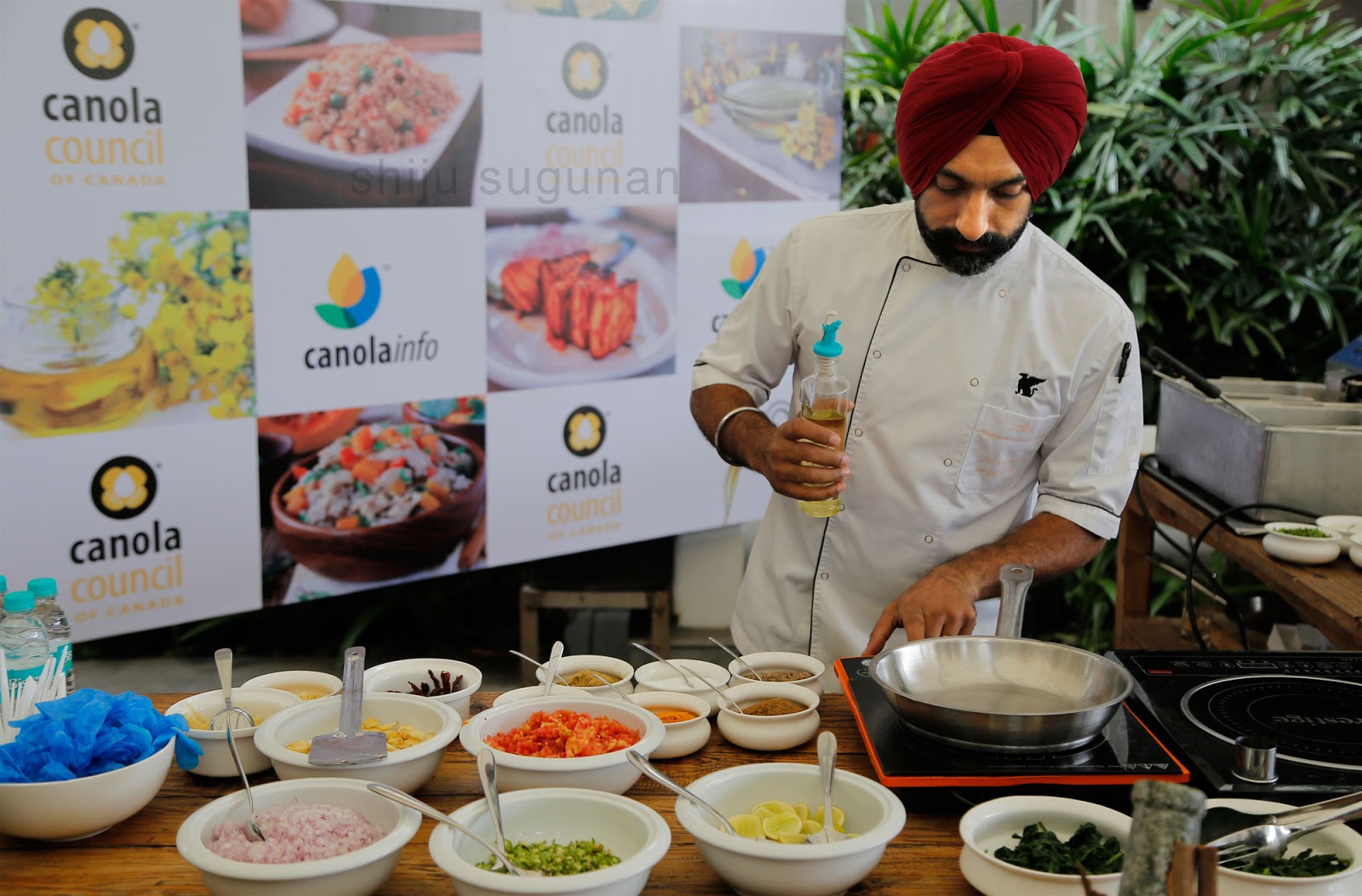 He made Khada Desi Palak (stir-fried baby spinach) canapés with Missi roti base. Here's the recipe I figured by watching him cook:


The neutral taste of Canola oil did help in preserving the original flavors of the ingredients in the dish... 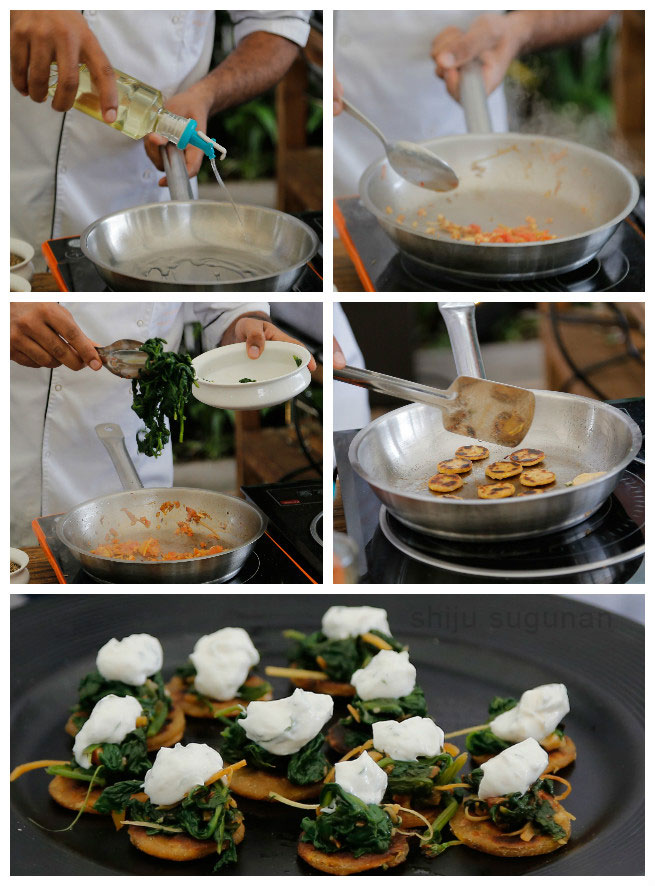 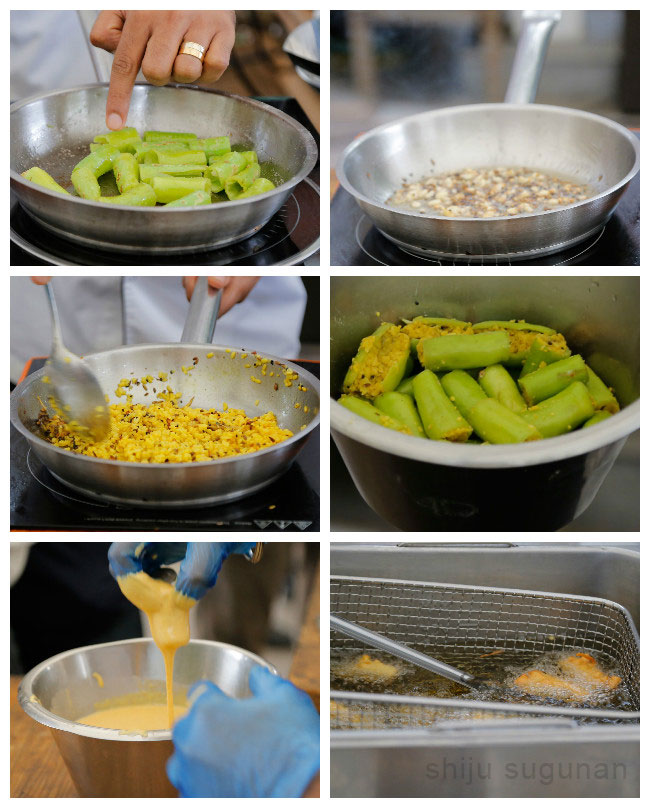 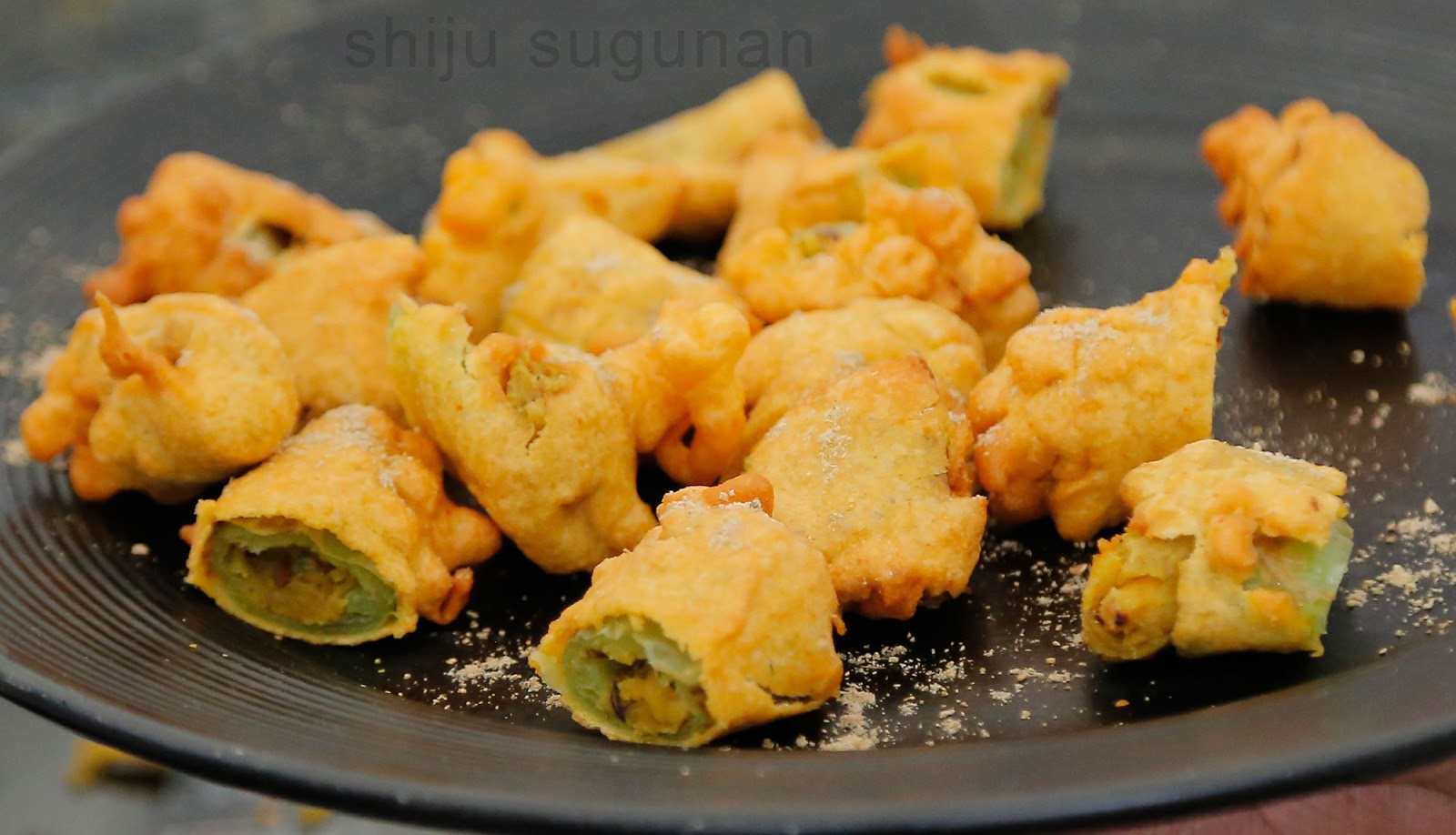 The baking substitution chart shows how to use canola oil in cakes, muffins, brownies, pie crusts and other baking recipes

The good chefs at Marriott prepared many interesting dishes all cooked in Canola oil to show its versatility in the kitchen.
Chicken Malai kabab... 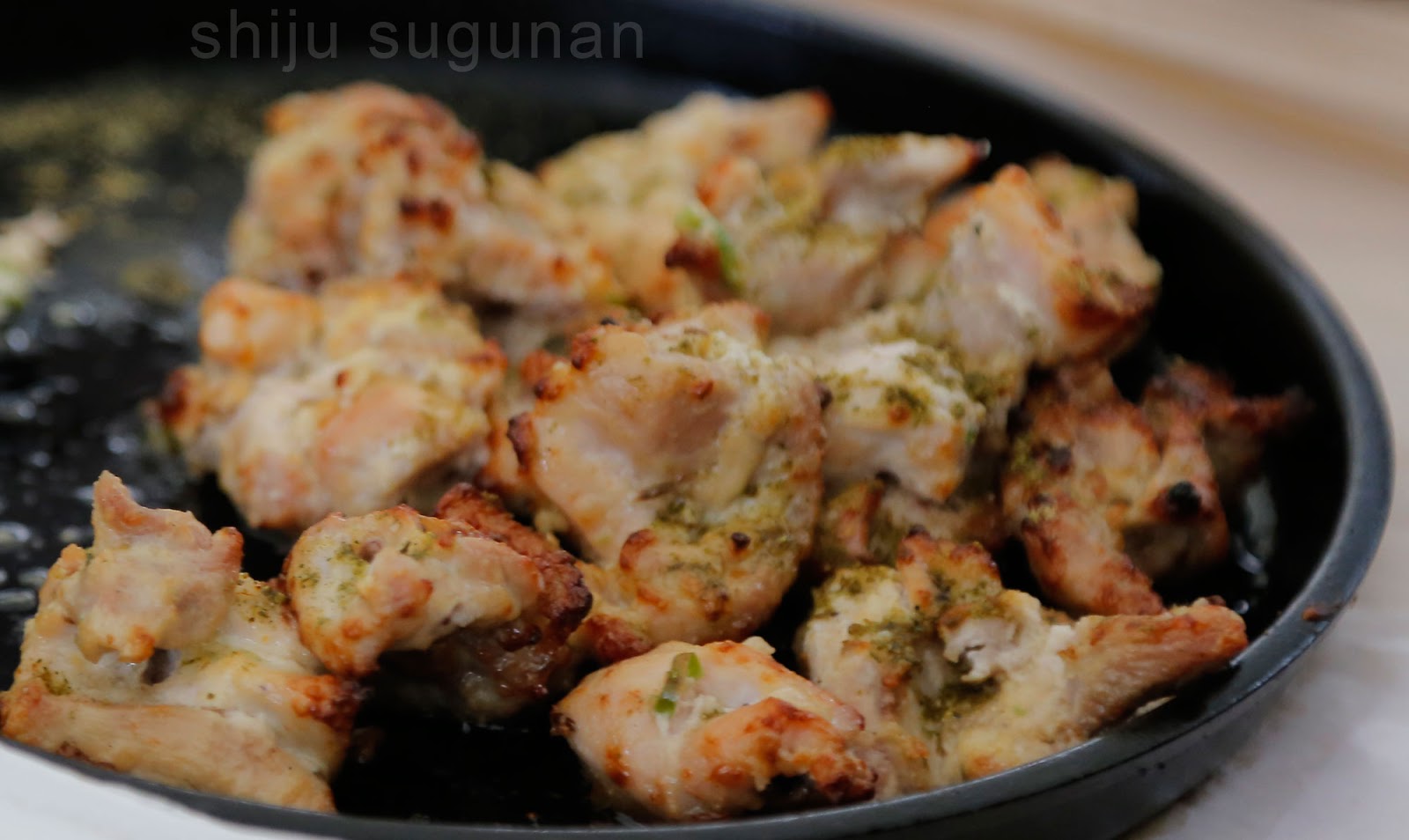 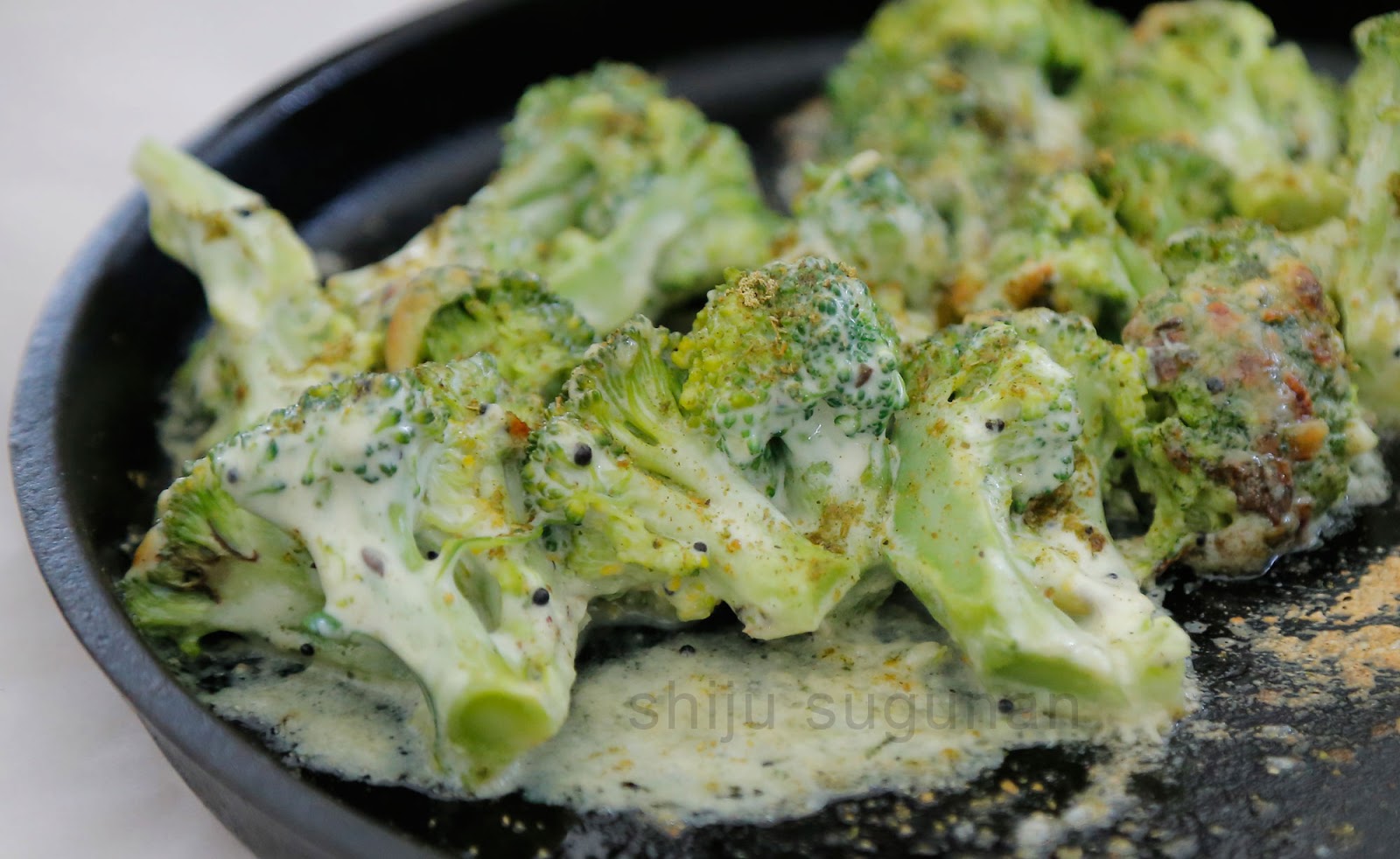 I learned a lot from the event. Canola oil is priced in India at INR200 to 250 per litre which makes it much cheaper than Olive oil. I recommend everyone to switch to Canola oil if you haven't already done so.