I am in Kerala for a paternity break. As soon as I arrived today morning, I  got a glimpse of this fella in the backyard. This is the only shot I got before it disappeared in the foliage. Hope to see him again and capture a better photo. 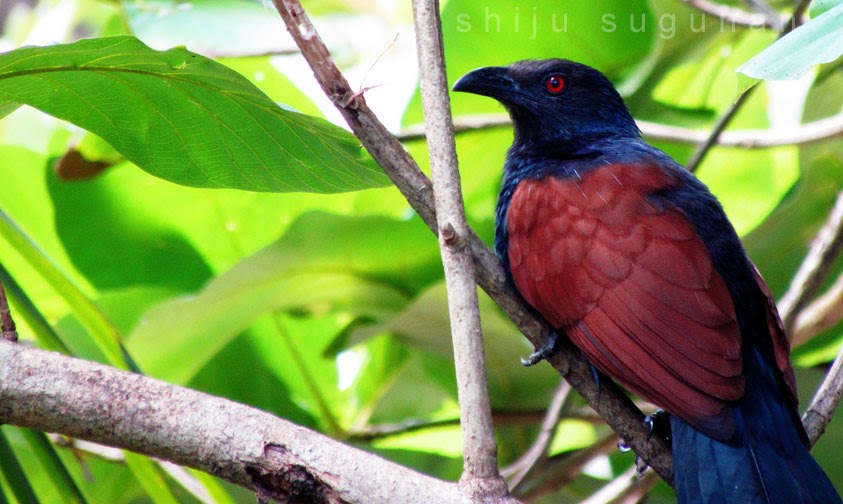 The Greater Coucal or Crow Pheasant (Centropus sinensis) is a large non-parasitic member of the cuckoo order of birds, the Cuculiformes. A widespread resident in Asia, from India, east to south China and Indonesia.

Some interesting information about the bird:
1. They are weak fliers, and are often seen clambering about in vegetation or walking on the ground. They are brisk walkers.
2. They eat a wide range of insects, caterpillars and small vertebrates. They are also known to eat bird eggs, nestlings, fruits and seeds.
3. Greater Coucals are monogamous, and the courtship display involves chases on the ground and the male brings food gifts for the female. The female lowers her tail and droops her wings to signal acceptance. The nest is built mostly by the male over about three to eight days.
4. The calls are booming low coop-coop-coops, the reason why the bird is called Uppan in Kerala.
5. The bird is associated with many superstitions and beliefs. The deep calls are associated with spirits and omens.
Posted by Shiju Sugunan