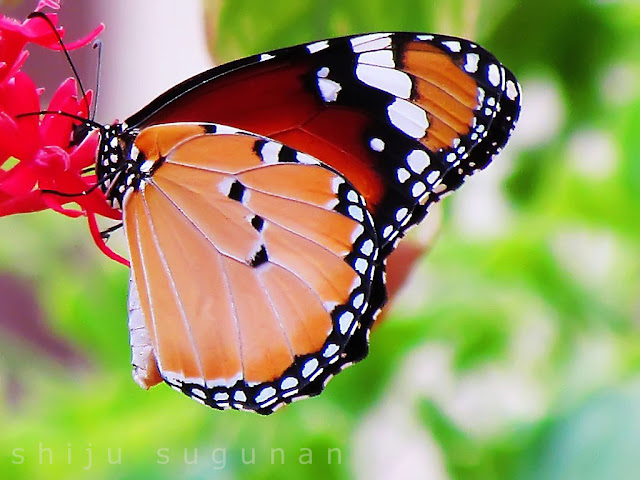 Plain Tiger or African Monarch, is a common non-edible butterfly which is widespread in Asia and Africa.

The Plain Tiger is believed to be one of the first butterflies to be used in art. A 3500 year old Egyptian fresco in Luxor features the oldest illustration of this species.


The Plain Tiger is protected from attacks due to the unpalatable alkaloids ingested during the larval stages. The butterfly therefore flies slowly and leisurely, generally close to the ground and in a straight line. This gives a would-be predator ample time to recognise and avoid attacking it. Inexperienced predators will try attacking it, but will learn soon enough to avoid this butterfly as the alkaloids in its body cause vomiting.

The butterfly also has a tough, leathery skin to survive such occasional attacks. When attacked it fakes death and oozes nauseating liquid which makes it smell and taste terrible. This encourages the predator to release the butterfly quickly. The Plain Tiger thus has the ability to recover "miraculously" from predator attacks that would kill most other butterflies.

The protection mechanisms of the Plain Tiger, as of the other danaines, and indeed of all colorful unpalatable butterflies, result in predators learning this memorable aspect at first hand. Predators soon associate the patterns and habits of such butterfly species with unpalatability to avoid hunting them in future.

This advantage of protection has led to a number of edible butterfly species, referred to as "mimics", evolving to resemble inedible butterflies, which are referred to as the "model". The resemblance is not only in color, shapes, and markings, but also in behavioural and flight patterns. This form of mimicry - where an edible species mimics an inedible species - is known as Batesian mimicry.