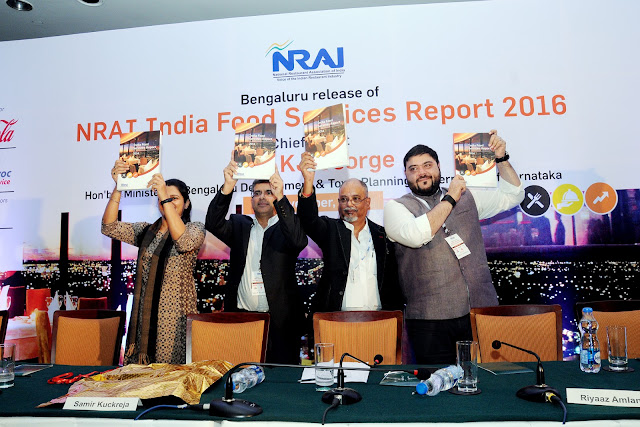 Bangalore, November 09, 2016: After the successful launch in New Delhi and Mumbai, the NRAI India Food Services Report 2016 (NRAI IFSR 2016) was unveiled by Mr. Riyaaz Amlani, President, NRAI, Mr Ashish Kothare, Chapter Head, NRAI Bangalore and Mr.Samir Kuckreja, Past President and Trustee, NRAI in the state capital today with a special pull-out 'Bangalore Market Outlook’ highlighting data on Bangalore’s food services industry. Commissioned by the NRAI and compiled by Technopak, the NRAI IFSR 2016 is the only and most comprehensive trade report on the Indian food services sector.

Bangalore, which is also referred to as the ‘Silicon Valley of India’ is the second fastest growing major metropolis in the country. Discussing the report with the restaurant fraternity, Mr. Riyaaz Amlani, President, NRAI, remarked, "Bangalore is the fourth largest food services market after Delhi, Mumbai and Kolkata. The employment generated by food services in the city is around 2,15,000 people in both organized and unorganized segments. Organized segment itself employs around 1,60,000 (74%) people of the total workforce. This highlights the burgeoning of Bangalore as a key city for the food services sector.”

Mr Riyaaz Amlani also pointed out that, “Bangalore is the perfect blend of new vs. old when it comes to the food services sector; which is also the reason why the sector has seen an exponential growth over the last few years. That said, there are still several issues dampening the spirit of the sector. Until recently, the closing hourfor pubs/ bars and restaurants followed an archaic time of 11:30 pm. However, the NRAI Bangalore Chapter was able to champion a change and as of July 2016, the excise officer extended the deadline to 1 am giving the sector a welcome reprieve. The Bangalore food services sector still has its fair share of challenges like the recent ban on plastic, ambiguity in rules & regulations of local Municipal Corporation for the restaurant industry. This coupled with the existing COTPA and Noise Pollution Act tends to indirectly affect the industry. We are striving to work along with the government to ensure ease of doing business along with a simpler license renewal process.”

Noting that this is an exciting time for investors to be in the F&B Sector, Mr Samir Kuckreja, Past President and Trustee, NRAI mentioned, “Bangalore is one of the most prosperous modern business centers in India with a young and demographically diverse population that comprises of students, single working professionals and nuclear families. It has one of the highest eating-out and ordering-in frequencies in the country and averages around seven to eight occasions with an average monthly spend of INR 5,500-5,750 per household per month. The strong cosmopolitan culture of Bangalore is also represented by the cuisine mix of the city. I believe this is a great time for new start-up ventures to cash in on the trend." Given that stature, the report seeks to highlight major trends and figures of the sector in this hub.
While presenting details from the report, Mr Kuckreja also highlighted the following key points with respect to Bangalore’s food services industry:

He further added, “The food industry does robust business catering to tourists and locals alike and despite the challenges, Bangalore food services sector has come up trumps. It is for the first time that the report is being released in Bangalore and I believe that this initiative would help in bridging gap between the fraternity members and policy makers for accelerating industry’s growth. Simplified licensing structures and law & order situation will allow restaurants to flourish, leading to their contribution in a variety of meaningful ways.”

NRAI IFSR 2016 includes results from in-depth interaction with a variety of companies, meetings with over 50 CEO’s, consumer research that covered 2000 people across 20 cities of India and trade research at restaurants. The report addresses international market perspective for nine countries including USA, China, South Africa, Turkey and UAE and reveals that the food services market in India has triggered growth across a wide range of ancillary industries, thus providing a boost to the entire ecosystem.

WatConsult and Lodha Capital Markets have also contributed chapters on ‘Digital Marketing Practices’ and ‘Prospects of Private Equity/ Venture Capital Investing in India’ respectively to this report.
A copy of the NRAI IFSR 2016 can be bought at INR 45,000 on nrai.org/buy-report.

National Restaurant Association of India (NRAI) was founded in 1982 and since been the leading association of the Indian restaurant industry. Headquartered at Delhi, we represent both independent and chain restaurants owners and operators in India.
The association in its 34th year has a pan India presence with members comprising of restaurants, suppliers and educational institutes associated with it. NRAI is governed by a committee of members and led by a President and Office Bearers representing various national and international brands from the F&B sector.

Regional Chapters
NRAI works closely with a network of State and City chapter partners in Mumbai, Bangalore and Gurgaon. More Chapters in Noida, Pune, Hyderabad, Chennai and Kolkata are being set up.